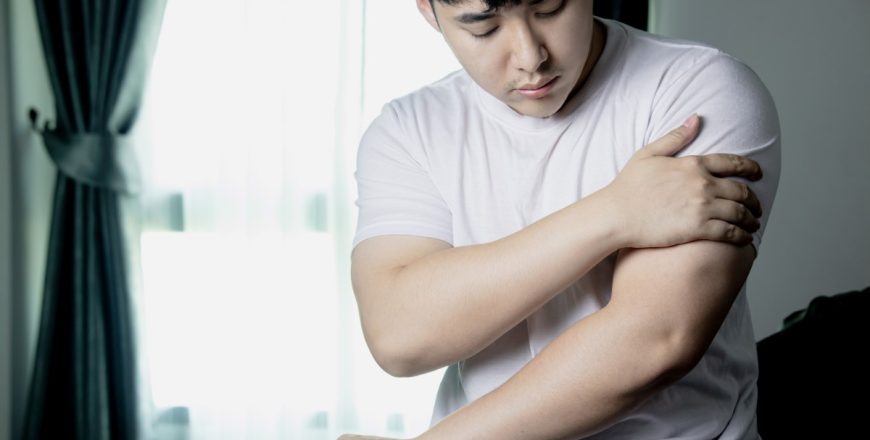 Can RLS Affect Your Arms?

Your skin crawls, you have trouble sleeping, and you’ve been told your legs make odd jerking movements when you’re at rest. It’s possible you’re experiencing early warning signs of a condition called restless legs syndrome, but something else has bothered you – similar pain and sensations in both of your arms.

Restless legs syndrome (RLS) is an ailment triggering an overpowering desire to move the legs, usually resulting from a painful sensation. It typically happens during the evening or nighttime when you’re seated or lying down. Movement can ease the unpleasant feeling but only temporarily.

According to some studies, restless legs syndrome has been identified as a genetic syndrome that can pass from a parent to a biological child. More than 90% of people with RLS have a biological relative with the condition. These patients are known to get symptoms early, before age 45, compared to someone with RLS without the genetic link.

Other potential causes include low iron levels, depression, and diabetes.

RLS can develop at any age, though it typically worsens with age and is more common in women than men. It sometimes is present in people with other conditions, including:

Can RLS Affect Other Body Parts?

People who report symptoms of restless legs syndrome in their legs have also been diagnosed with a related condition known as restless arm syndrome (RAS). According to a study by the United States National Institutes of Health (NIH), “In RAS, the arms are predominantly affected with little or no involvement of the legs.” It’s worth noting that diagnosing RAS in patients with restless legs syndrome is complicated.

In the few reported cases of RAS, the pain appears to be contained in either or both arms, from just below the elbow all the way to the fingertips. Like restless legs syndrome, temporary relief may be possible through arm movements.

Symptoms of either condition may be treated in several ways, including ketamine infusion therapy from a licensed specialty clinic. Talk with your healthcare provider to see if this is a good option for you.

For someone with restless arm syndrome, it’s not unusual to complain of any of the following sensations:

According to the Journal of the American Medical Association, strange sensations and jerky movements in the arms may be a precursor to, or even the first warning sign of, restless legs syndrome.

If you think you have restless legs syndrome or sensations affecting your arms, see a healthcare professional for diagnosis and treatment options. In most cases, your medical professional will use criteria developed by the International Restless Legs Syndrome Study Group:

Treatment from a Specialty Clinic is an Option

If you have RLS, your healthcare provider may recommend store-bought pain relievers, prescription medicine, exercise, or lifestyle changes to reduce the discomfort. Another option is ketamine infusion therapy from a specialty clinic, which may keep the symptoms at bay with continual treatment.